How do you get from only an idea for a book cover, to one that was recently requested for use on the set of Grace and Frankie, a popular new Netflix TV series?

This happened to Sue Mangum and me for our book, Braver Than You Believe: True Stories of Losing Love and Finding Self, which just celebrated its 2nd birthday. We found that like good writing, creating an attention-getting cover is a process that unfolds over time. It helped that Sue knew the artist she wanted to work with: artist Amy Michelle, based in Atlanta. She also knew she wanted an image of a heart being sewn up. 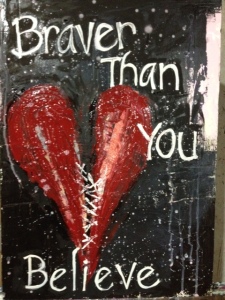 Sue and I were both excited about the potential, but we felt the last word in the title, “Believe” was too separate, making the title look at first glance like “Braver Than You.” Sue requested a change, and by the end of May, we were pleased as pink lemonade with this: 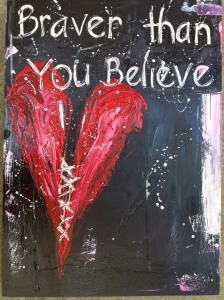 In the meantime, I was taking an eBook DIY class with Bethany Carlson of The Artist’s Partner I learned about the importance of bold colors, readable fonts, and having a cover pop out even as a thumbnail-sized image. For a class assignment, I mocked something up, and chose the red, white, and grey colors from Amy Michelle’s work. Those colors echo the themes of grief and romance from our book.

If we had offered a teaser free e-download, we could have used this…

The last step for the official cover was deciding about the font for the subtitle and author names. Sue and I emailed back and forth, and considered several options including the infamous Comic Sans, which some design enthusiasts actually want to ban.

We eventually decided on Calibri, a font that is now Microsoft Word’s default for new documents. Why? Because it works. Combined with the emotive, hand-lettering of our book’s main title, the Calibri choice was simple, modern, and professional.

…And here’s where the work paid off: A month ago, I received a request through our self-publisher (Amazon’s CreateSpace), from Act One Script Clearance. Script clearance is necessary whenever a production team creates a set, using books, posters, or other products that are copyrighted. Act One staff were seeking books that looked like plausible reading for the characters played by Lily Tomlin and Jane Fonda on Grace and Frankie. In the show, these women are left by their husbands, when the husbands decide they are gay and fall in love with each other.

When I asked how they found our book, I learned that the production team searched Amazon for books their characters might be reading during a time of great turmoil. And while I’m sure our book’s title was key in the search, an attractive cover didn’t hurt. In fact, the cover was the main copyrighted work requested for use in the show. The production team sought permission to show it throughout the season, on bookshelves or coffee tables. It is now a part of this season’s permanent set.

Claire Cameron is an educational psychologist at the University at Buffalo (SUNY), and aspiring science writer. Her dream is to write about human development, health, and science in a way that everyone will want to read.