Most Kickstarter publishing category campaigns fail to raise even a fifth of their funding goals. Data nerds like me may want to visit kickstarter.com/help/stats for the full post-mortem. Suffice to say: raising money to publish your book is really hard.

But it’s not impossible. I have produced successful Kickstarter campaigns for writers, ranging from a gritty New Jersey mob memoir with a ten-pin twist, to a gleefully adorable children’s picture book introducing entrepreneurship. Their successes were not a coincidence. Despite their very different audiences, their paths to success were nearly the same.

I’m looking forward to teaching an afternoon workshop at WriterHouse on February 16, 2014, to walk through these case studies and what we can learn from them. For now, I’m happy to share three of the ten essentials for Kickstarter success for writers.

These 3 are the tip of the iceberg. At the seminar we’ll be covering how to tap into the extrovert and promote, how to map out the money in advance, and how to shoot a decent, short video. We’ll also be covering how to pick rewards and at what pledge levels, the (somewhat complicated) mechanics of setting up the necessary accounts for payment processing, some (hilarious!) case studies of what not to do, how to stay within key Kickstarter guidelines so that your project gets approved, what to do when you hit the mid-campaign slump, among other essential elements to success. 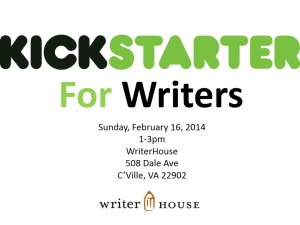 If you only take away one idea from this post, it would be “if you build it, they will come” does not apply to Kickstarter. Some lucky folks are salespeople by nature. The rest of us need to practice the steps to master them. And it’s easier to do it with a team.

This creepy crap only works in 80’s Costner movies

If you’ve read this whole post thinking, “what the heck is Kickstarter?!?”, you’re not alone. For Bowling For The Mob, the campaign was the first Kickstarter experience for the writers and a majority of the people who pledged. It’s a fundraising platform for artistic projects which, since 2009, has raised nearly a billion dollars. The best way to learn more is to wander around on Kickstarter.com. Enjoy!

If you’re considering Kickstarter to fund your book, it’s hard – but possible. No hocus pocus required.

Please consider yourself invited to the Kickstarter for Writers seminar at WriterHouse on 2/2/14.

Please visit the successful campaigns for Bowling For The Mob and Camila’s Lemonade Stand.

And, please feel free to stop by The Artist’s Partner for more information on the services I provide – like Kickstarter campaign production – to artists who want to keep a bigger share of the profits by producing and distributing their work.

Bethany Joy Carlson is a co-founder of BACCA Literary, a WriterHouse board member, and founder of The Artist’s Partner.