I’ve started a list of books that I consider “required reading”—not books that were forced on me, or titles that I would force on anyone else, but books that made me, the stories out of which I seem to be built.

Like most human beings, I resist when I’m told to read something and I don’t linger long in the company of those who enjoy shaming others for what they haven’t read yet. Anyone who really loves reading knows that there are too many wonderful books to read in one lifetime—you have to choose. So, while I don’t like bossy imperatives, or veiled humiliation techniques, I do love to see lists of things that have inspired others. I’ve started my own list with one of the first books that really mattered to me: The Once and Future King, by T. H. White.

I’ve heard that if you want a clue for what to do with your life, a vocation to pursue, you should look back at the things you loved to do as a kid. Buried in the play of childhood you’ll find the rewarding work of adulthood. When I was young, I became fascinated with King Arthur, and I began reading versions of the Arthurian legends and comparing them—letting the versions sink into me, letting the differences and irreducible truths permeate. I took that story in from every angle—devoted myself to it.

I could have started with Tennyson or Malory, but I began with T. H. White. The Once and Future King became the standard bearer for me and one of the building blocks of my understanding, one of the contributing factors of my emotional range. For years, if asked, I called it my favorite book. After I had studied literature for awhile, I decided that I should read it again, to see if it still had something to give, somewhere else to take me. I found that it had weathered very well.

Beyond the legend, beyond the story itself, which manages to hold up under all this re-visitation, here are just a few reasons why I love this book:

The Once and Future King starts with a children’s book. The Sword in the Stone (Book I) is a lovely book about humility, deep friendship, loyalty, forgiveness, and learning to see the world from the perspectives of others. It introduces us to Arthur before he’s a king, when he is just “the Wart.” Growing up with the protagonist, as Harry Potter fans can attest, is a powerful way to get to know a character. For the curious, there are versions of The Sword in the Stone, too—subtle variations between the stand-alone title marketed separately for kids, and the one included in the complete novel, which some critics say is darker, influenced by the horrors of World War II.

Also, one of the characters moves backwards through time, growing younger while others age. This formal choice is how White gets away with his use of anachronisms, and the 20th century social and political commentary sprinkled throughout the book. Another tiny, perfect reward that this device offers is a moment that I didn’t catch my first time through. Near the beginning, two of the characters meet—for one character, it is an introduction, the origin of what will be an important relationship, for the other (who experiences time backwards), that meeting is the very last time he will lay eyes on a beloved friend. This little heartbreak, nestled into the opening pages, disappeared the first time I read it. I could only fully feel it—as devastating as a tragic ending—after I knew what the characters would mean to each other, on my second read through. 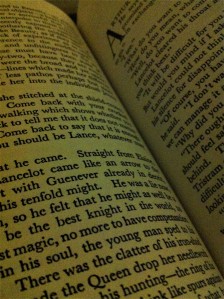 And, I have White to thank for manticore, bodkin, escutcheon, greaves, angelica, featherfew, varvels, jesses, guidons, vergescu, fewmets, menee, hurdy-gurdy, foin, gelid, limner, ricks, rusks, purlieus, slee, souterrain, and widgeon. This is just a sampling of the rich vocabulary from The Once and Future King, a brief catalog of terms you might learn from various categories, including falconry, jousting, armory, architecture, hunting, heraldry, and archery.

Finally, The Once and Future King is full of flawed characters and human truths. I consider it a brief, effective course in empathy. The pretty people in the story aren’t always good, and the “good” aren’t always very likable. Most Lancelots you will encounter are handsome, dashing, irresistible. White’s Lancelot, however, is homely, isolated, uncomfortably religious, and he feels bad about himself most of the time. The book also gives us despicable characters who get redeemed, and decent, well-meaning characters who land in terrible positions, often of their own making—sometimes through big, glaring mistakes, sometimes through a series of little, shuffling missteps that eventually lead nowhere good. Finding themselves in tragedy, or violence, or grief, they have to choose a best way forward, an honorable way to keep going and make things better.

Noelle Beverly writes poetry and prose, promotes local writers in the surrounding community, and is a member of the BACCA Literary group. Photos by the author.

2 replies on “Required Reading, Part One”

Beloved by Toni Morrison is essential reading, especially with the current political climate of denial and hostility. And especially now that Ms. Morrison is no longer with us. Haunting story.

I agree! Thanks, Carolyn.